OGURHYTHM Book Release Party and Cool Japan Sake Party in Singapore (Jan. 10, 2015 at 6:00 p.m.)
A party to celebrate Shigeo Oguri's publication of his book OGURHYTHM as well as the Cool Japan Sake Party were held at Singapore's Republic Plaza in the 61st-floor members-only Tower Club. Originally planned as an exclusive party for 100 guests, more than 130 attended the festivities including members from the Embassy of Japan in Singapore; representatives from Japan's Ministry of Agriculture, Forestry and Fisheries; the president of sake brewery Shimizu Seizaburo Shoten Ltd.; the president of Aichi Dobby, Ltd. as well as the president of Oriental Co., Ltd. (who introduced some specially prepared curry roux), both of whom visited as part of Cool Japan–related efforts; financial institution representatives; members of the Rotary Club of Singapore; and others. Oguri performed two songs as opera singer Sekai, both of which were a hit among party guests. 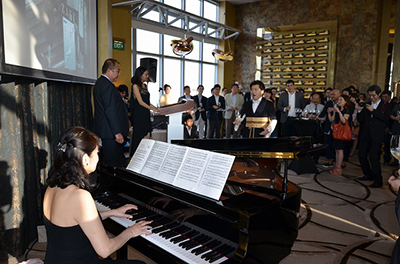 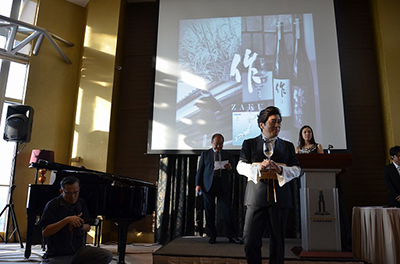 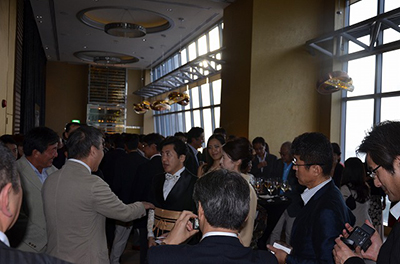